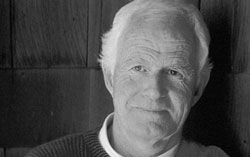 Trained as an architect, Kipp Stewart has truly distinguished himself as an American designer of furniture. He is known within the design profession as a disciplined and gifted artist with a profound respect for the traditions of his craft. His award-winning furniture is widely admired for its simple and functional elegance. Kipp Stewart lives and works in Carmel, California, but credits early studies in Europe with instilling an appreciation of history and classical forms. He also cites the late Charles Eames, with whom he worked, as an important influence. Throughout his career, Stewart has achieved numerous industry accolades.