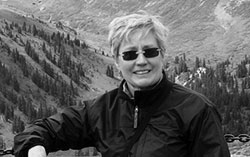 Margaret McCurry is an architect, Chicago native, and graduate Loeb Fellow in Advanced Environmental Studies from the Graduate School of Design at Harvard University. In 1982 she merged her architecture and interiors practice to form Tigerman McCurry Architects, a firm committed to the creation of a contemporary and authentically American architecture and the recipient of seven national AIA awards. McCurry's work focuses on residential architecture and interiors. Lakeside benches and receptacles and Windmark chairs, table and ottoman for Landscape Forms reflect themes and idioms explored in the architecture. She is a member of the INterior Design Hall of Fame, was named "Designer of Distinction" for 2002 by ASID and an "Icon of Design" by Traditional Home Magazine in 2009. Her Lakeside Collection received Interior Design Magazine's Best of the Year Award in 2006.