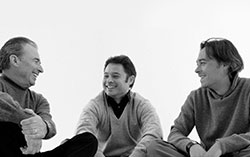 Pamio Design was founded in 2000 as an operative cell joined to the Roberto Pamio Architecture Studio and saw the arrival of two new professionals, Matteo and Paolo Pamio. The base was developed by Roberto Pamio who works intensely on an international level both in architectural planning and design. His creative sensibility led him to move towards to industrial design at a young age, developing his own personal interpretation which found full expression through lighting and interior furnishings. Knowledge of the materials and the close attention to detail distinguish his design objects, which is also reflected in the realisation of architectural projects, for a perfect fusion and synergy of space and furniture needs. The balance of the three personalities: Roberto, Matteo and Paulo, has made it possible to put a more innovative approach side by side with experience which has shown the ability to give design a unique significance, determined by the fusion of important concepts such as proportion, technology and aesthetics.  Formed under the banner of art and design, they have transferred new technology and creativity to the studio, enhancing original concepts, using alternative materials such as carbon, into innovative areas of application such as the world of sustainable energy, and a project vision inspired by the values of contemporary life. Developed projects are many and varied, from the world of lighting that has seen important collaborations (Artemide, Fabbian, iGuzzini, Leucos, Oty Light, Studio Italia Design, Antonangeli) to the furniture sector (Arc Linea, Arflex, Matteograssi, Offital, Seven) and for the home (Palluco, Cadel, C2, Biesse). Of particular significance are the many street furniture projects (in partnership with Metalco and Calzavara) which have seen the practical application of new technologies, such as the photovoltaic system, or the use of ecological materials, instruments that characterise an operating philosophy focussed on the development of original and sustainable design.